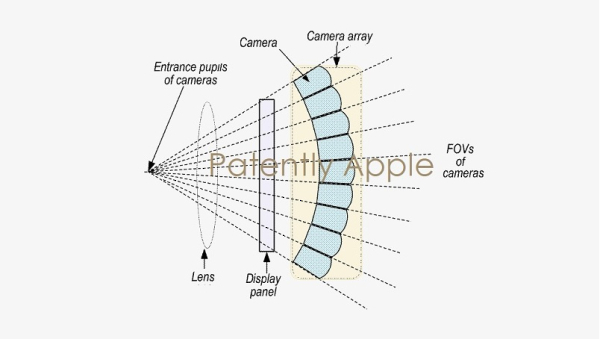 Today, the United States Patent and Trademark Office officially granted Apple a patent relating to stage cameras which use a series of mirrors capable of bringing a scene in front of the HMD closer to the user’s eyes to obtain a more accurate representation of the scene.

The simulated environments of virtual and mixed reality systems can be used to provide an interactive user experience for multiple applications, such as applications that add virtual content to a real-time view of the viewer’s environment, applications that generate 3D virtual worlds, interacting with training environments, games, remote control of drones or other mechanical systems, visualization of digital multimedia content, interaction with the Internet, exploration of landscapes or virtual environments, etc.

To make simulated or augmented environments as realistic as possible, Apple’s invention focuses on what is known in the art stage cameras.

According to Apple, stage cameras can, for example, be used in video transparency devices in mixed reality (MR) or virtual reality (VR) systems.

In conventional video transparency devices, one or more scene cameras can be mounted on the front of the device. However, these stage cameras generally do not correspond to the reality of a user. Pointment ohF Vsee (POS). Apple’s stage cameras will at least partially correct the POV of the cameras to more closely match a user’s POV by imaging the entrance pupils of the cameras at a location closer to the user’s eyes.

Apple’s stage camera system can include mirrors and cameras that capture stage light reflected from the mirrors. By using mirrors to reflect light, the entrance pupils of cameras are imaged at a location closer to a user’s eyes to get a more accurate representation of the user’s perspective.

Apple’s patent FIG. 6 above is a high level flowchart of an operation method for a scene camera system.

Some of the inventors of Apple