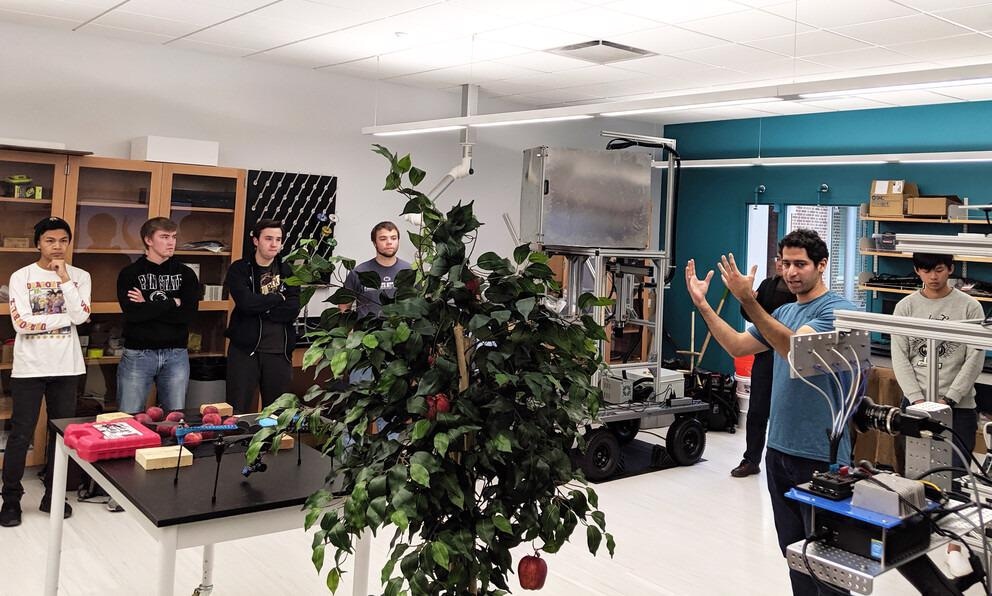 Researchers from the Pennsylvania State University developed a new camera system with active lighting as an important step in the development of machine vision systems that allow robotic devices to â€œseeâ€ precisely the agricultural targets to which they will react.

The system uses “over-current” LED lights to generate a powerful flash with the potential to fire multiple times per second, aiding in the creation of reliable daytime imagery, as reported by Daeun Choi, assistant professor of agricultural engineering and biological at the College of Agricultural Sciences.

The technique deals with the changing inconsistencies in lighting and colors caused by sunlight and also eliminates motion blur that occurs with vehicle movement and ground vibration.

In the future, this or a similar system is likely to be used to guide mechanisms that independently perform labor-intensive tasks such as pruning apple trees, estimating fruit yield, l ‘thinning fruits and picking mushrooms. The innovative aspect of this research was that the current drawn by the LED lights was increased six-fold from its normal rating, resulting in an increase in illuminance..

Choi said the study is important as more and more farmers are eager to adopt precision farming and automation technologies to improve production and efficiency. With the impact of factors such as global competition, increased food demand due to population growth, and consumer expectations for good quality agricultural products, producers are drawn to machine vision systems equipped with remote sensing devices to facilitate data recording and analysis in agricultural applications.

Omeed Mirbod, researcher and doctoral student in agricultural and biological engineering, has developed a circuit for storing and releasing energy to the LEDs to generate a strobe-like effect and a controller allowing the synchronization of the strobe with a camera to capture images. Mirbod pioneered the concept of the LED strobe while working at Carnegie Mellon University, before coming to Penn State, where xenon flash lamps were used for daytime imaging.

Artificial intelligence works well with images that are really rich in information, so the important thing is to capture high quality images. For agriculture, we need images that are invariant to outdoor lighting conditions. If you capture an image in which one fruit is very saturated with light because of the sun, and then capture another in the shade where there is little sunlight, the artificial intelligence you train to detect the fruit might have a hard time. to identify it.

The system was applied in an apple orchard for three days in the summer of 2020. Images of several canopy structures were captured throughout the day, both in cloudy and sunny weather. The use of LED flashes leads to a remarkable improvement in the brightness and color consistency of the images.

The study was published in Computers and electronics in agriculture.

The researchers affirmed the high quality of the images captured by the system. During the 11 hour period, the images displayed an average decrease in standard deviation of 85% for the hue saturation value channels compared to that of the automatic exposure adjustment. Additionally, the prototype system was able to correct motion blur in machine vision images with the camera moving at a speed of 4 miles per hour.

According to Mirbod, the results revealed that the designed LED flash system is able to reduce the unwanted effects of changes in lighting and motion blur in images formed due to outdoor field conditions. Since most of the previous research in this area has only been done under indoor conditions, this research was considered important.

When we apply the same technology to agricultural fields, we run into a lot of difficulties. The most difficult thing is the changeable weather and sun conditions. And when we use a standard camera setup, with a lighting system designed for indoor use, we end up getting some really terrible images that are hard to work with..

The development of an artificial vision approach to active LED lighting by researchers at Penn State aims to mentor agricultural robots capable of working in the field 24/7.

“So it doesn’t matter what time they work or if there is a lot of sun. Because at the end of the day, we want to have fully automated systems that can operate in the field at all times.“, concluded Mirbod.

The study was supported by the Pennsylvania State Horticultural Association and the United States Department of Agriculture’s National Institute of Food and Agriculture.

Behind the Lens - with Kieran Delaney of the Press Camera Club