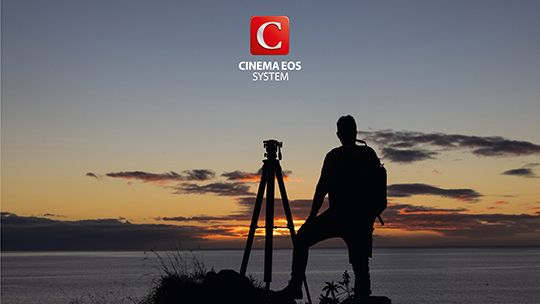 A very enthusiastic ukulele player is on hand to demonstrate the benefits of the EOS R5 C’s new Dual Base ISO feature (a first for Canon), which “enables increased sensitivity and minimal noise when shooting in poorly lit environments.

This could be a very useful feature – it’s different from the Dual Gain output of the Canon EOS C70, instead letting the EOS R5 C natively shoot at two different ISO values, depending on what format you’re shooting in. But if you shoot regularly, say ISO 1600 or ISO 3200, it could be a bonus over the EOS R5.

Since the EOS R5 C is built around the same chassis as the EOS R5, it has the same card slots – one for fast (and expensive) CFexpress cards and the other for more UHS-II SD cards. standard.

And as if to defend the lack of IBIS, Canon also mentions that its existing cinema cameras – the C500 Mark II, C300 Mark III and EOS C70 – all use the same “advanced 5-axis electronic IS” that you’ll find in the EOS R5C.

Canon claims it “works seamlessly with both stabilized and unstabilized lenses” when shooting handheld, or when the camera is not mounted on a tripod, gimbal or drone. But realistically the EOS R5 C is going to spend most of its life in or on one of these three things.

Here’s an interesting tidbit – Canon says the EOS R5 C has “advanced 5-axis electronic IS”, but there’s no mention of in-body image stabilization (IBIS), which mechanically stabilizes the sensor.

A controversial omission? The EOS R5 has IBIS and it is a very useful tool for photography. But realistically, professional videographers will always opt for their own superior stabilization (like a gimbal or monopod) over IBIS. And IBIS can even be a downside, introducing a flickering effect to the video – so it wouldn’t be a major loss for the EOS R5 C’s intended audience.

Now the important lens talk – it doesn’t look like Canon is announcing any new cinema-focused RF lenses, which is a bit of a shame. Instead, it talks about the ability to adapt existing EF Cinema lenses using the EF-EOS R adapter.

Some RF mount equivalents of these EF lenses have been rumored for some time, but the RF mount certainly has excellent video options with unchecked focus and control rings, which are essential for tweaking your settings in peace.

The launch of the EOS R5 C will surely see more cinema-style lenses launched in the near future, however.

Ah, that’s one thing we were wondering – the EOS R5 C gets the multi-function accessory shoe, first seen on the Canon EOS R3.

That’s a pretty big advantage over the Canon EOS R5 and means it can power stereo microphones and shotguns without any messy cables getting in the way.

So far the Canon EOS R5 C has been touted as a cinema camera, but Canon is also talking about its 45MP stills and 20fps burst speed powers and focus automatic, which will be the same as the EOS R5.

There’s also an interesting ‘photo/video’ switch on the top plate and Canon says the ‘familiar design and ergonomics of the EOS R5 and EOS R6 have proven extremely popular with hybrid shooters’. The EOS R5 C sees this design “evolve to meet video creation” and is “our smallest and lightest cinema EOS camera”.

We’re interested to see how that extra bulk from the cooling fans feels in the hand, though.

Interestingly, Canon talks about the aerial potential of the EOS R5 C when mounted on a drone. It’s hard to pinpoint exactly which drone is featured in his video, but unlike Sony, Canon doesn’t (yet) manufacture its own drones.

Still, talking about aerial photography and videography is definitely an attempt to counter Sony’s impressive advancements with its Airpeak platform, which was tailor-made to work with full-frame mirrorless cameras like the Sony A7S III.

You don’t need to be shooting in 8K to justify buying an EOS R5 C: its 4K and Full HD video modes are upsampled from 8K. As Canon says, this should “deliver exceptional clarity with low noise”.

The slo-mo modes are also impressive – you can shoot 4K/120p video with audio, so no need to create a separate recording for that. You also get Dual Pixel CMOS AF and EOS iTR AF X, which is the same tracking technology found in the Canon EOS 1D X Mark III.

Like the EOS R5, the EOS R5 C can record 8K/30p raw video internally, which is quite impressive for such a small camera. But the difference is that the EOS R5 C has active cooling fans (hence the chubby look), which means there are no overheating limits. Hooray!

It shoots DCI 8K with 12-bit color depth at up to 30 frames per second – and if you connect it to external power, you can even shoot 8K/60p. Does anyone have a spare 2TB memory card?

It has a full-frame CMOS sensor (the same as the EOS R5) and is designed for shooting weddings, music and even VR (with Canon’s new fish-eye lens). It is “our smallest and lightest cinema camera”, says Canon.

At that point, just a minute before kick-off – the big question is whether or not we’ll see more of a big announcement from Canon? Some cinema-flavored RF lenses have been rumored for some time, so perhaps they’ll arrive alongside Canon’s new camera. Let’s find out.

In case you don’t know how to watch Canon’s live stream, which is only ten minutes away, we’ve embedded it above. You can also tune in by visiting Canon’s official YouTube channel.

It’s worth staying here, though, as we’ll throw in our thoughts and analysis as the launch goes on – and who knows, maybe surprise us with a guest appearance from Michael Bay.

A few years after the arrival of the Canon EOS 5D Mark II, the first official Canon Cinema EOS camera was launched: the Cinema EOS 300. This camera featured an 8.3 megapixel oversampling sensor and launched a range that has ultimately led to last year’s Canon EOS C70 (above).

The EOS C70 was particularly interesting as it was the first Canon cinema camera to feature the RF mount, the same found on its consumer full-frame cameras, such as the Canon EOS R5. Much like with Sony, the lines between cinema and photography are blurring – and that may give us some idea of ​​what to expect today.

First, a quick introduction to Canon’s Cinema EOS range. The camera giant’s video lineup really started in 2008 with the Canon EOS 5D Mark II – it may have been a DSLR, but it was the first full-frame model capable of shooting 1080p video.

This meant it was embraced by filmmakers who liked the look of its full-frame sensor, from a relatively small and cheap camera by professional video camera standards. You can see our photo of the 5D Mark II above (yes, we’ve been reviewing cameras for that long).

Welcome to our Canon Cinema EOS launch live blog. There’s only half an hour left until the show starts, but we’ll tell you what to expect.