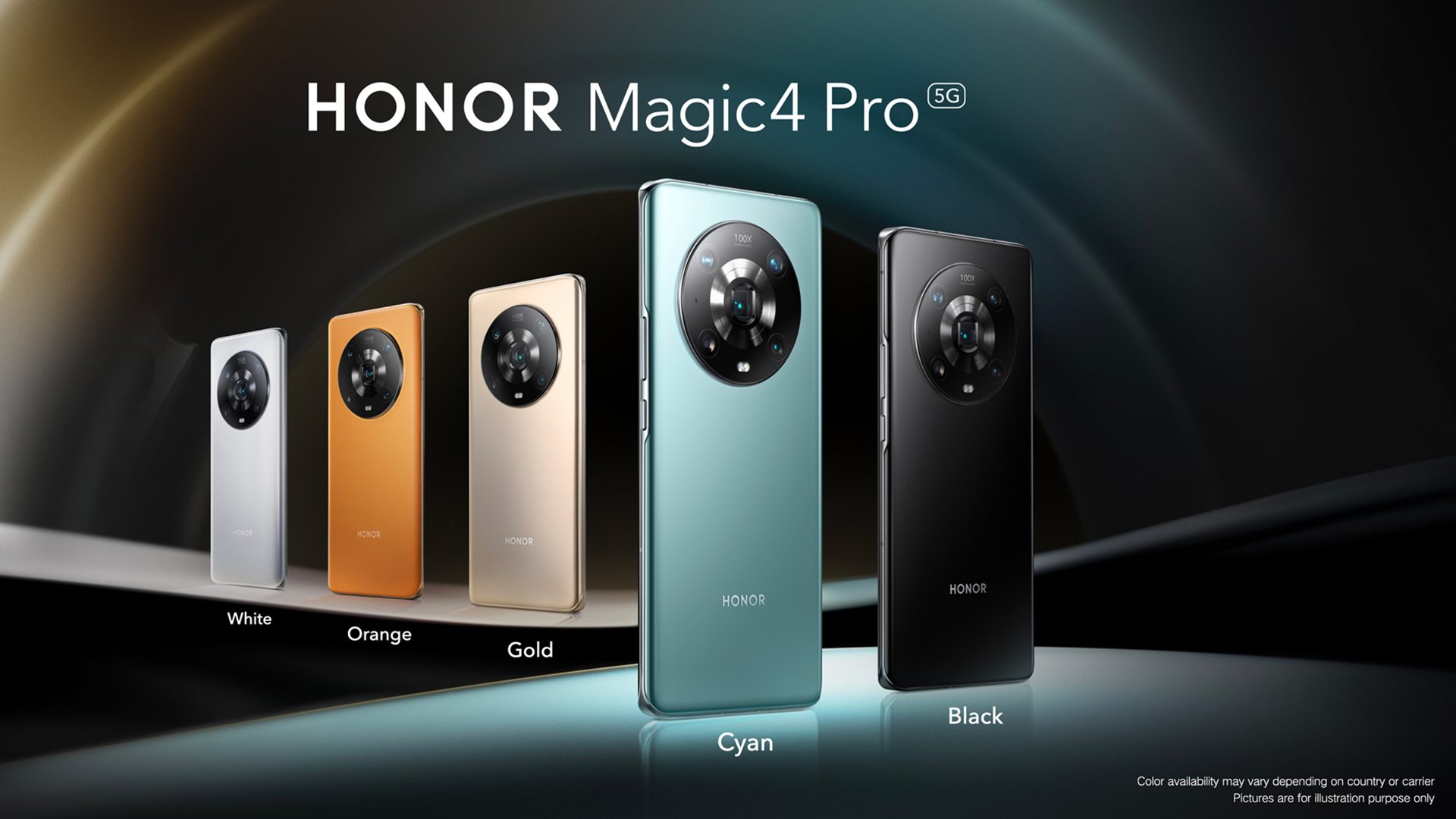 The Honor Global Launch Event at MWC Barcelona 2022 has just ended. Expectations for the upcoming devices were high, but Honor rose to the challenge and introduced the Honor Magic 4 Pro, revealing promising cameras, new AI and security features. Keep reading to learn more.

Honor has launched a total of four different devices, with the biggest expectation being the Honor Magic 3 Pro successor. Fans will be delighted to hear that the Honor Magic 4 Pro has been announced and follows a similar design philosophy as the previous model. Given that pricing was also announced in Euros, I strongly suspect that the devices will finally be widely available outside of China.

The most impressive thing about the Honor Magic 4 Pro during the presentation was obviously the cameras. Housed in a cyclopean camera island in the center of the device, the three cameras promise a cutting-edge photographic experience made possible by hardware and software innovation. Now we have to wait for the actual reviews of the device to verify these claims.

At the same time, the weakest standard version was unveiled, the Honor Magic 4, which comes at a considerably lower price at just over $1,000 (899 euros) but makes considerable concessions on the display, secondary cameras and wireless charging.

A new watch and set of headphones were also unveiled, each with their own unique features. The Honor Watch GS 3 will come with a 1000 nits display and dual-band GNSS support and the Honor Earbuds 3 Pro TWS headphones with coaxial drivers and a built-in temperature sensor for on-the-spot thermometer readings.

On the back of the device we have three cameras: a 50 MP wide lens camera, a 50 MP ultra wide with 122o FOV and finally a 64 MP telephoto with 3 optical zoom .5x, OIS and digital zoom up to 100x. These cameras are also supported by a direct time-of-flight (dToF) sensor to better track moving objects and distance, as well as a flicker sensor that adjusts the capture frame rate to light sources to reduce flicker in videos.

The Honor Magic 4 comes with the same 50MP UW and Wide cameras but with a mere 8MP periscope telephoto lens.

ML photographic capabilities should be improved. According to Honor, the two main cameras work together to capture better ultra-wide photos, using new artificial intelligence algorithms that combine images for greater clarity in their center.

The 6.81-inch OLED display comes with a variable refresh rate of 1-120Hz and a resolution of 2848 x 1312 (460 PPI) with 100% DCI-P3 color gamut coverage at 1000 nits of brightness, which is admittedly low for 2022, as is the case with the similarly priced Oppo Find X5. On the software side, Honor has equipped the new devices with MEMC compensation that promises to bring conventional 30 FPS content up to 60 FPS for smoother object movement across all your content.

Coming back to the camera features, selfies were less focused, but Honor still equipped the Honor Magic 4 Pro with a 12MP ultra-wide camera and a 3D depth camera. The normal version of the Magic 4 will only feature a 12MP selfie stick with a 100 degree FOV.

Honor was directly targeting the toughest photography competition, Apple’s latest iPhone 13, and demonstrated several scenarios where Magic 4 Pro comes out on top. But, all of these tests will need to be verified by reviewers before we can comfortably proclaim a winner here. Honor has taken an obvious route in trying to outdo Apple on every level, with a focus on color accuracy that strives to come close to that of DSLR cameras.

Honor pointed out that videos captured by the Honor Magic 4 Pro will have frame-to-frame quality comparable to normal photos, allowing you to quickly snap photos of your favorite moments without compromising on quality. Additionally, videos should feature 10-bit capture at 4K60fps.

For the operating system, Honor has equipped the new devices with Android 12 which runs through its own Magic UI 6.0 software. The promise? Many advantages in games and battery life. A feature that also appeared was privacy calling, which through AI processing can detect where your head is and only transmit audio to you, protecting the privacy of your conversations from those who are at a distance. proximity.

All of these AI capabilities are in part enabled by the new Snapdragon SoC, the Snapdragon 8 Gen 1, a flagship-level SoC that is expected to battle with Apple’s latest A15 Bionic found in the latest iPhone 13.

Read also: Which smartphones will receive the Snapdragon 8 Gen 1?

Read also: We tested the iPhone 13!

In addition to the performance gains, the new SoC also commits to providing an additional level of security with a trusted runtime environment on top of Honor’s already included TEE. This means that all your sensitive information such as passwords, facial recognition scans and fingerprints are stored and executed independently.

Impressively, both wired and wireless charging will be 100W, enabled by an exclusive Honor SuperCharge platform that can charge your device by 50% in 15 minutes. The Honor Magic 4 backs off a bit here, with just 66W of Wired SuperCharge. But will such charging speeds hurt the battery life of the device? As with all promises from above, we have to wait for the reviews to find out.