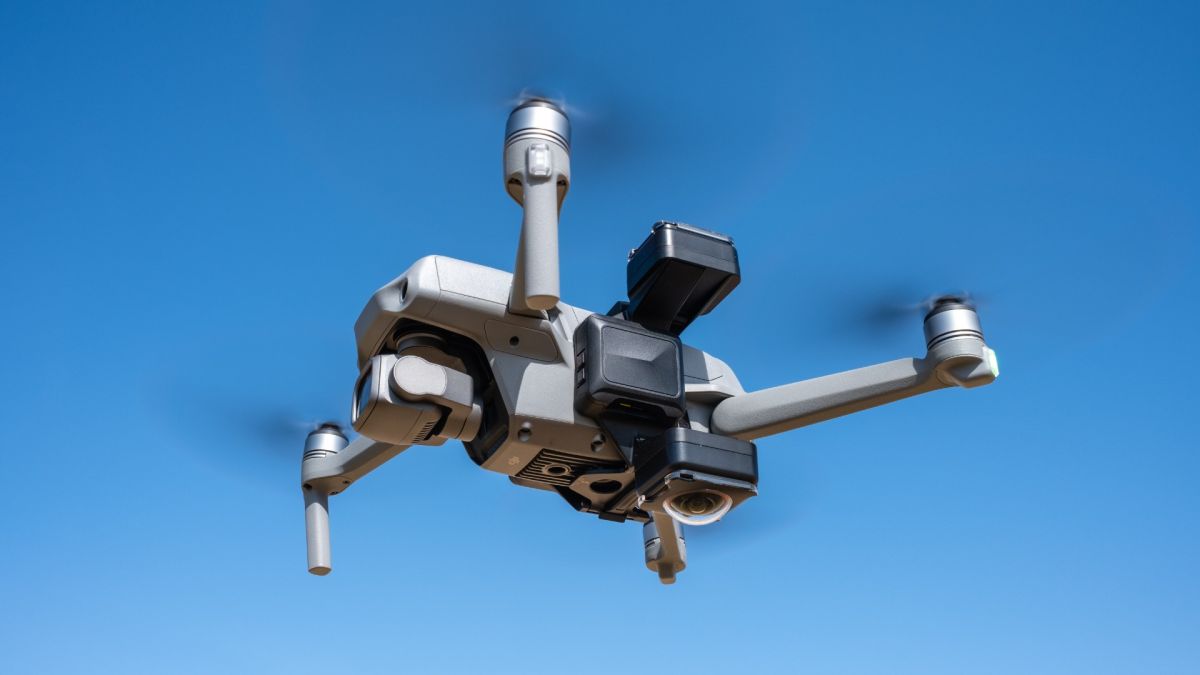 Battery life: Up to 48 mins

Immersive 360° capture is the next evolution in drone photography and video, and the Insta360 Sphere makes it possible. This innovative camera clips onto DJI Mavic Air 2/2S drones and the camera design means the drone remains completely invisible in video footage. So the question is, why do you need a 360° camera for your Mavic Air 2/2S?

The Insta360 Sphere massively expands the creative possibilities of the drone, because by editing a 360° drone video in the Insta360 phone app or the Insta360 Studio desktop app, you can easily create an immersive handheld style video. first person (FPV). And it’s not just FPV-style footage you can capture and create, cinematic pans and other camera movements not possible with a standard drone camera are just as easy to create when editing.

The fact that the Sphere is only compatible with two drones is a huge limitation, but on the plus side the DJI Mavic Air 2 and 2S are fantastic drones, the latter being an excellent balance of size, weight and image quality . Take a look at our DJI Air 2s review to see what we mean. Additionally, and perhaps one of the most exciting aspects of the sphere, is that you don’t have to be an expert drone pilot to capture the footage needed to edit into visually impactful video.

Designed to perfectly fit the DJI Mavic Air 2/2S, the Insta360 Sphere attaches around the drone’s airframe using a secure clip. This has no adverse effect on the GPS, and holes in the bottom of the sphere allow the downward sensors to work. The sphere is composed of an upward facing camera and a downward facing camera which allows to obtain a 360° view where the camera is made invisible in the videos.

The bottom camera of the Insta360 Sphere sits below the drone airframe so the drone cannot lay flat during takeoff and landing. This means that the bottom camera lens hits the ground, but to combat this the camera comes with two lens caps that stick on the bulbous lenses and a special landing pad is also included. And, as you’d expect, the camera’s 192g extra weight reduces flight times slightly.

Ease of use is especially important when working with a drone. The Insta360 Sphere is easy to attach to the drone and shooting using the phone app to control the camera is simple. To attach the sphere to the drone, simply unclip the frame, place it in the middle of the back of the Air 2/2S and lock the clip at the top to attach it to the drone. Once attached in the only position it fits, there is little to no chance of the safety clip coming loose if properly connected. Speaking of safety, before taking off, make sure to always check the drone regulations in your area.

The connection between the drone and the smartphone app is via Wi-Fi with a working distance of approximately 10 m. This means that you must start recording before takeoff and film your entire flight. Once the drone lands, you must reconnect to the sphere again via Wi-Fi to stop recording. It’s a small hurdle, but it only takes 30 seconds so it’s definitely not a major issue.

Using the Sphere couldn’t be easier; you just need to fly the drone slowly and smoothly over, under and around obstacles, and the video effects such as camera direction, movement, speed and other effects are applied while editing on the fly. using templates and keyframes. Additionally, the Flowstate stabilization does a fantastic job of keeping cropped footage smooth.

Just watch a tutorial or two on how to use the phone and/or the desktop app and you’re good to go. Editing in the phone app is cumbersome, though it offers more functionality than the desktop app in the form of templates that let you create visual effects like Dolly Zoom. The desktop app is ultimately better for editing. However, this software is only able to crop and trim clips, you cannot edit them together, so you will need another video editor for that.

Camera control can be set to manual or automatic, and it’s easier to set the shot to automatic before takeoff due to the drop in Wi-Fi. This means you just have to fly to capture 360° footage for a few minutes before landing, reconnect the camera to the app and stop recording. Image quality is good, but not great, although the fact that you can select any camera angle and create exciting smooth camera movements that mimic what can be achieved with an FPV drone is what makes up for it that. Not sure exactly what that means? Then check out our ‘What are FPV drones?’ article to learn more.

Drone accessories are generally inexpensive, but since the Insta360 Sphere is a camera, it’s more expensive than you’re probably used to paying. That said, it massively expands the creative video capabilities of your DJI Mavic Air 2/2S, but the fact that it’s tied to use with just two drone models is a big limitation.

The standalone kit costs $423 / £440 and includes the Sphere camera, two sticky lens protectors, two lens caps, battery, charging cable, lens cloth and landing pad. The memory card kit costs a little more at $440 / £456 and includes all of the above plus a 64GB microSD card. The price includes customs duty and import tax, so the price listed on the Insta360 website is the price you pay.

Should you buy the Insta360 sphere?

This unique add-on drone/camera accessory effectively renders the drone invisible, so you can enjoy a seamless 360° view with the ability to easily create dynamic and immersive footage. The Insta360 Sphere is going to appeal most to drone pilots who would love to be able to capture FPV drone footage but are unable to fly these notoriously difficult drones, or simply don’t have the time to learn how to fly them.

The beauty of the Insta360 sphere is that you can edit video to achieve an FPV-like style of footage, regardless of your drone piloting experience. You can also create interesting panoramas that would be difficult or impossible to capture with a standard drone, so it’s not just for creating mind-blowing effects. The main downside is that the Sphere is only compatible with two DJI drones.

If this product is not for you

The Insta360 Sphere is a specialized camera, where the drone remains invisible due to the separation and viewing angle of the two cameras. The only other way to attach a 360 camera to a drone is to use a drone camera mount and attach a 360 camera, although this will likely also capture the drone in videos, unlike the Sphere.

So if you don’t have a DJI Mavic Air 2/2S, or don’t want to buy one of these models, and want to attach a 360° camera, the best thing to do is to buy one camera/lamp support for your drone, which are available specifically for certain drones or come with a universal fitting. You can then attach a camera such as the Insta360 ONE X (opens in a new tab) or the Ricoh Theta SC2 (opens in a new tab) to enjoy 360° video footage on almost any drone.

Need help choosing a drone? Our best drone guides and our best beginner drone guides will help you. Be sure to keep an eye on our list of drone deals to get the best value.