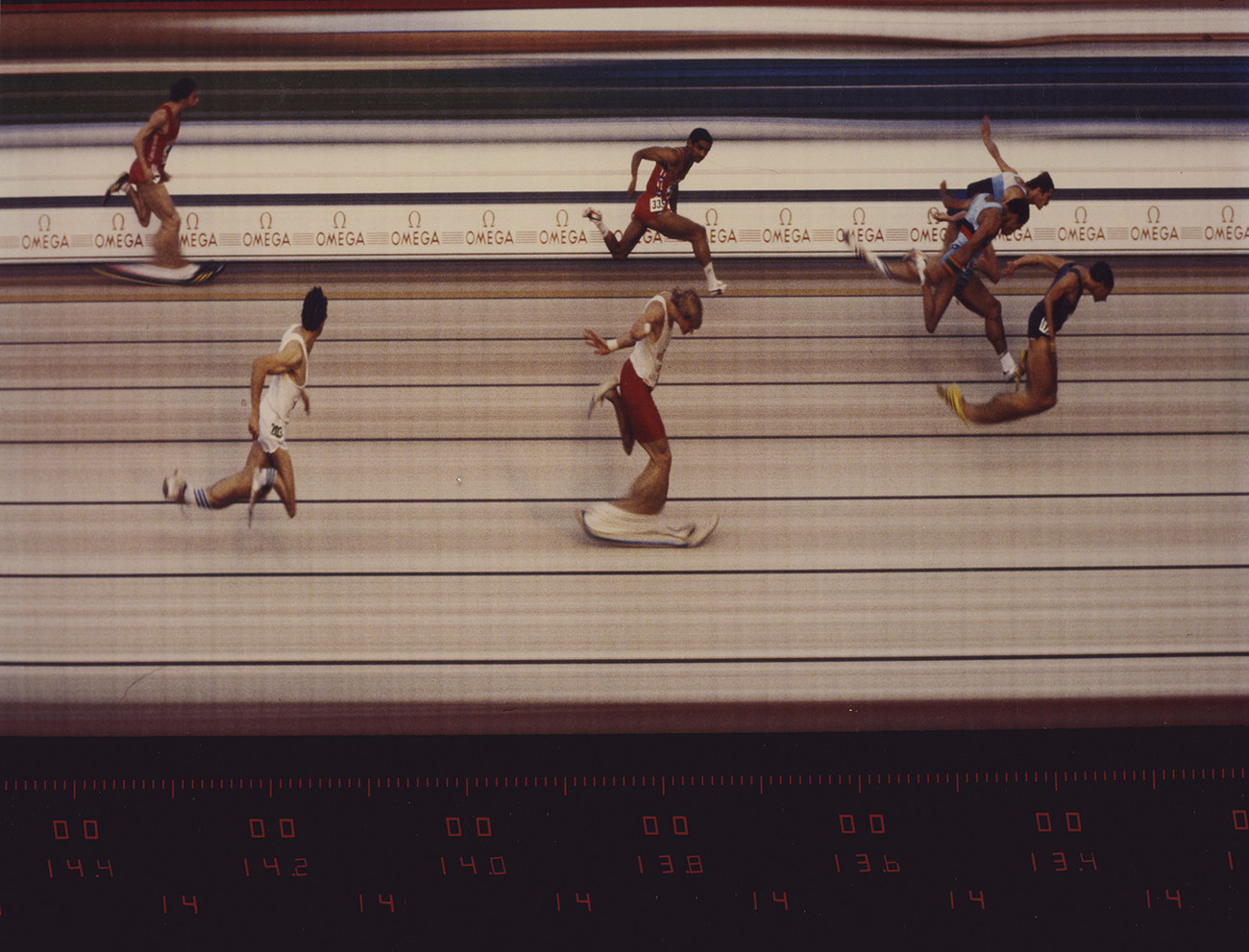 Photography and watchmaking, central techniques of Western modernity, both rely on the fine mastery of time. Literally and symbolically, they put time in a box. Their proximity is such that Roland Barthes spoke of photography as a â€œclock to seeâ€. The fact remains that their intimate ties have been surprisingly little considered so far.

Between the two world wars, in the face of economic crises, Swiss watchmaking know-how found a diversification in the manufacture of cameras. From photography to watchmaking, there is certainly the step of optics and chemistry, but above all the common base of precision mechanics with its cogs, its springs, its levers, its counters and its millimeter adjustments. From the VallÃ©e de Joux to Aargau, companies are beginning to produce high-end cameras.

LeCoultre offers the Compass (1937), a masterpiece of miniaturized technology, a feat with multiple functions. L’Alpa de Pignons (1944) was a great international success in the post-war period, supported by the slogan “Camera of Swiss watchmakers”. The Michel pigeon camera (1937) is the ancestor of the drone camera: it allows aerial shots at low altitude for military reconnaissance missions. La Tessina (1960) by Siegrist is so compact that it can be worn on the wrist like a watch; it was a favorite Cold War spy device. The photofinish was developed in the post-war period by Omega, Longines and soon Swiss Timing. More topical than ever for sports competitions, photofinish makes photography a veritable visual clock, capable of showing the stretching of time down to its tiniest dimensions.

The exhibition invites you to this unprecedented exploration, accompanied by a rich publication by Editions Infolio, to be published at the end of February 2022. The publication includes case studies, thematic essays and an in-depth look at the relationship between photography and watchmaking. The exhibition and the publication are the result of a research project carried out in close collaboration with the University of Lausanne.

Two machines for the preservation of time

For almost two centuries, photographic theory has proclaimed that photography is an art of time. Yet surprisingly little attention has been paid to its intimate ties to the age-old art of time measurement, horology. Like the clock, the camera is defined as a machine that conserves time and, like the clock too, its operation is based on a fine mastery of the division of time (â€¦)

It is possible to establish a series of homologies between these two mechanisms capable, literally and symbolically, of absorbing time. Whether analog or digital techniques, their components are often similar. The same materials and the same tools were or are used for their manufacture. At the same time, they integrated advances in electronics and then in computing, which led to a revolution in their uses and their markets, in both cases. They are also metaphorical machines that question, with equal force, our relationship to time and embody the ephemeral nature of human existence. The camera and the clock have also, with the same concern for precision, gradually divided time to gain efficiency, going from the hour to the minute, then from the second to the tenth, hundredth or thousandth of a second.

With the shortening of exposure times, photography, long defined as the product of optics and chemistry, became just as much, from the end of the 19th century and the development of shutters, a highly mechanized technique, making involved many cogs, springs, levers, counters and timers. It is therefore increasingly calling on companies specializing in precision mechanics. This was the case in Switzerland, the heart of world watchmaking in the 20th century, where, in the face of the crises of the interwar period, photography was to appear as a privileged field for the diversification of watchmaking know-how. As early as the 18th century, automatons and music boxes had already put watchmaking mechanics at the service of the automated production of images and sounds, and in the 20th century, several Swiss companies perpetuated this tradition by turning to the manufacture of devices camera, record players or recorders. Many of them chose above all to develop a remarkable series of high-end cameras which, developed from the 1930s to the 1960s, would in many respects mark the exchanges between the two fields.

(Luc Debraine and Olivier Lugon; extract from the introduction to the â€œPhotography and watchmakingâ€ catalog to be published at the end of February 2022 by Infolio).

Compass, â€œBuilt Like a Watchâ€
Designed in the interwar period by a British inventor, the Compass bears the slogan â€œBuilt like a watchâ€. Its manufacture was entrusted to the LeCoultre & Cie manufacture, now Jaeger-LeCoultre. The aluminum camera, as big as a pack of cigarettes, is a technological marvel. Fitted with a 35mm lens and rangefinder for focusing, the Compass was fitted with 24 x 36 plates and later 6-frame roll film produced by Ilford in Britain. It has built-in filters, a light meter, two viewfinders (including one at right angles), a ground glass viewfinder, a spirit level and panoramic and stereoscopic shooting devices. Its internal movements are of incomparable precision, as is the care given to the finishing of the device, the CÃ´tes de GenÃ¨ve also being present on the movements of LeCoultre watches. The Compass advertising benefits from the know-how of the Lausanne agency Trio, a partner of the Le Sentier factory. Sold from 1937, the aircraft saw its destiny come to an end with the Second World War. In total, less than 5,000 of them were produced. Today it is highly sought after by collectors.

Alpa, â€œSwiss watchmakersâ€™ cameraâ€
In the 1930s, the inventor Jacques Bogopolsky, also at the origin of Bolex cameras, offered a 35 mm camera to the Pignons watchmaking company, established in Ballaigues in the Vaudois Jura. The device has the originality of having a double rangefinder and reflex viewfinder. Pignons redesigned the entire case, then marketed it under the Alpa name in 1944. A clever prismatic viewfinder was offered in 1949. In the 1950s, the height of the Vaud brand, around sixty employees assembled up to 200 cameras per month. Alpa’s advertising took advantage of Switzerland’s aura of technical precision and reliability, as well as the fact that the products were manufactured by watchmaking specialists. The slogan “Swiss watchmaker camera” is obvious. The luxury positioning of the brand is also an asset. In the 1960s, Alpa suffered from Japanese competition before struggling to respond to the introduction of electronics in cameras. The brand tries to diversify its products (medical photography, reproduction, macro, underwater and panoramic) but does not avoid bankruptcy in 1990. The name Alpa is then bought by Swiss entrepreneurs who launch a high-end medium format camera .

Michel pigeon camera
In 1909, the German Julius Neubronner presented an automatic camera for racing pigeons. Intended for both civilian and military surveillance, the device used a pneumatically triggered self-timer, as well as two lenses capturing two images per flight, soon replaced by a single rotating lens. The device is attached to the bird’s chest with elastic straps. The German army gave up using it. In 1936, Adrian Michel d’Argovie patented a similar camera, also for military purposes. Michel ran a watch company in Walde. He seeks to diversify his production in a bad economic period.

His know-how enabled him to design a mechanical time delay inspired by watches, equipped with a spring, a gear train and an escapement system. The 70 gram camera can take 6-7 photos at 30 second intervals or 12-15 photos at 15 second intervals. A mechanism resets the shutter and ensures the return of the pivoting lens to its initial position. Michel’s watchmaking know-how allows him to fit these many elements into a small case. The Swiss army will not be interested in the invention for pigeons. The production will be abandoned after the manufacture of a hundred units.

Tessina, in the service of espionage
In the early 1950s, German engineer Rudolf Steineck developed a tiny wristwatch camera. Financial setbacks forced him to move to Ticino, where he worked on a miniature 35mm camera that could fit in a pack of cigarettes. The case contained 300 small parts, and he entrusted the manufacture and assembly of it to the watch company Siegrist in Grenchen, in the canton of Solothurn. The Tessina was launched in 1960.

Unlike its miniature competitor Minox, the camera uses standard 35mm film which can be rolled up in a special cassette. An almost clockwork movement automates the transport of the film and the cocking of the shutter. The Tessina has two lenses on the side, one for aiming and one for shooting. It can accommodate a range of accessories, starting with a wrist strap that allows it to be worn on the wrist like a watch. Other accessories include a light meter, magnifying glass, image erecting prism and a rectangular 17 jewel watch. The Tessina was used extensively during the Cold War by American, Soviet and East German intelligence services. He is one of the protagonists of Alfred Hitchcock’s film Topaz. It was found on one of the agents in charge of the Democratic Party robbery at Watergate, the case that led to the downfall of US President Richard Nixon. More than 20,000 units of the Tessina were produced until the 1990s.

Photofinish, photographic chronograph
The story of Photofinish embodies the convergence of photography and watchmaking, brought together here with the aim of pushing the boundaries of precision in the measurement of time. From the 19th century and the invention of the shutter, photography exceeded the speed of the human eye. It was quickly used to determine the winner of sports competitions, starting with horse racing. As early as the 1940s, particularly in Olympic competitions, Omega and Longines offered equipment integrating time measurement with image capture.

The photofinish is a continuous photographic recording, made with the camera shutter open. The film scrolls at the same speed as the sports competitors in front of a slot aligned with the finish line. The result is a long strip of film on which it is possible to distinguish the precise moment when each competitor crosses the selected area. In other words, the gap between two competitors does not indicate a distance, but a time interval. The system aims to be objective, impartial and as accurate as possible. The cameras were initially analogue, which meant that the film had to be developed before transmitting the results. Then, electronics, video and digital technology have constantly improved the accuracy of the system. Omega and Longines founded the Swiss Timing company in 1972, which later became part of the Swatch Group. Today, a Scan’O’Vision digital camera from Swiss Timing is capable of recording up to 10,000 images per second of each competitor crossing a finish line.