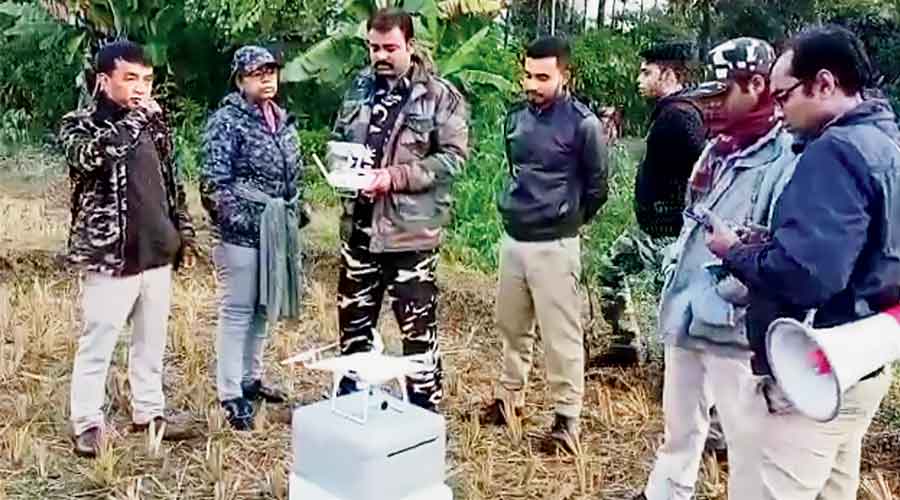 Anxiety had also been rife in the western Dooars since Friday morning, as a savage defender strayed into the fringes of Gorumara National Park in search of fodder and killed two people.

Foresters used a camera drone on Friday at a tea plantation in the Malbazar subdivision of Jalpaiguri district to track down a Himalayan black bear spotted in the garden on Thursday evening, hours after another was rescued from it. a marriage hall in the city of Malbazar.

Anxiety had also been rife in the western Dooars since Friday morning as a savage defender strayed into the fringes of Gorumara National Park in search of fodder and killed two people, damaged their homes and a private complex nearby.

A resident of the Good Hope tea plantation on the outskirts of Malbazar spotted the bear in the garden on Thursday evening.

His alert prompted teams from the Malbazar Wildlife Squad and the local police station to reach the garden, but the bear could not be found.

Wildlife squad shooting officer Dipen Subba said as the bear continued to elude them, on Friday they engaged a drone equipped with cameras to find the bear. “We have not located it yet. Tea workers and their families have been asked to let us know if the animal is spotted again,” he said.

Another bear that infiltrated the town of Jalpaiguri earlier this week has yet to be found. Foresters set a trap in Jubilee Park on the Teesta bank, but the bear did not approach. Some forestry officials believe the bear has left town.

In the Dooars, sources said the elephant first entered a private compound in northern Dhupjhora, on the outskirts of Gorumara, and damaged it. Then it was off to Lal Sukra Para to break down the hut of Bijoy Minz, 32, who was sleeping. He lifted Minz with his trunk and threw him to the ground. Minz died instantly.

The defender then traveled to the vicinity of North Ingdong Busty and entered the home of Agnu Oraon, 42. Oraon tried to flee but the elephant trampled him to death.

After a while, he left the place and headed for the forest.

Foresters in Khunia Forest had to confront angry villagers who confined the team for a time and refused to hand over the two bodies. Finally, they did. Foresters told family members of the deceased that they would receive compensation according to state standards.

Raj Kumar Layak, the shooting officer, said they were monitoring the situation 24/7. â€œWhile the paddy has been harvested, the elephants enter the villages to feed. We keep a constant eye, â€he said.