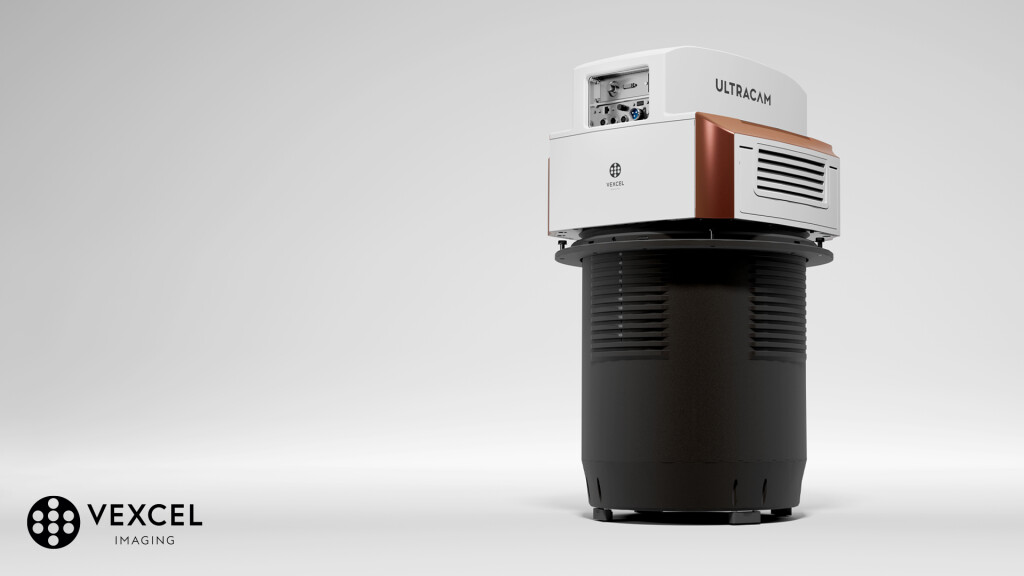 The new aerial camera introduces a new approach to motion compensation, temperature controlled lenses and eliminates the need for additional flights by other sensors.

Vexcel Imaging announced its latest camera version based on Vexcel Imaging 4e generation camera architecture, the UltraCam Condor 4.1. The aerial camera responds to a very specific application: the generation of ortho images at high altitude with superior image quality and flight efficiency. This is the result of the data requirements of organizations such as government and scientific agencies. For them, data is more meaningful in a larger context and over a larger geography. As airborne sensors have continued to evolve and enable the collection of larger areas of interest, large area mapping has become more economical, therefore more feasible, and provides more information faster, making the information derived from the data more quickly exploitable.

The UltraCam Condor 4.1 has different objective systems for collecting RGB, PAN and NIR simultaneously. The full resolution of 48,462 pixels is delivered through the RGB channel and the corresponding lens. Meanwhile, PAN and NIR capabilities are provided by independent channels, each with its own lens in the same camera. The PAN channel is the photogrammetric backbone of the UltraCam Condor and enables the generation of point clouds, DSM and DTM from the PAN imagery which are then used to generate the DSMortho and DTMortho images. Thus, no additional data such as lidar point clouds are required to generate the final image products. The UltraCam Condor’s NIR channel supports classification such as land use.

Benefit from UltraCam 4e Generation technology, the UltraCam Condor 4.1 features many enhancements that start with a fully CMOS-based architecture that enables a fast frame rate of 1 frame per 0.7 second, allowing customers to operate the system reliably even with jets and turboprobs at fast speeds.

The maximum efficiency of aerial data collection is achieved when aircraft are able to fly at higher speeds. This requires a fast sensor cycle rate and the ability to handle motion blur. 170 knots would be considered “fast” and can be accomplished with the UltraCam Condor, given its 0.7 second frame rate and adaptive motion compensation technology. If used in jets, the Condor could even be used above 200 knots and on flight lines of 150 km or more, taking national mapping to another level of efficiency.

To handle the large amount of data collected by CMOS sensors while maintaining the impressive image dynamics enabled by the latest CMOS technology, brand new electronics have been implemented for UltraCam 4e Generation systems, such as the new temperature-controlled lenses, designed uniquely for Vexcel Imaging, which guarantee images of exceptional sharpness, resolution and contrast.

The 4th generation UltraCam is based on the latest CMOS technology. Due to the smaller pixel size of current CMOS sensors compared to previous CCD generations, Vexcel decided to develop a new series of lenses for the 4th generation of cameras. The new lenses take into account the smaller pixel size and are able to solve the higher resolution of the current series and the next series of CMOS sensors. This ensures that the lenses are able to resolve the full range of resolution and image dynamics of CMOS sensors. All lenses are equipped with a temperature sensor and the lens temperature is recorded for each exposure. This allows Vexcel to calculate the temperature differences recorded during calibration and when taking a production image. The lens design is specially designed to maintain the image quality at an optimum level for the required temperature range.

An innovative new feature, exclusive to all UltraCam 4se generations of cameras, is Adaptive Motion Compensation (AMC). AMC is an innovative approach to motion compensation which, in addition to correcting image blurring in the direction of flight as provided by traditional forward motion compensation (FMC) technology, also corrects the blur caused by multi-directional camera movements during flight.

Adaptive Motion Compensation (AMC) is an innovative approach to motion compensation that, in addition to correcting image blurring in the direction of flight (known as Forward Motion Compensation or FMC), also corrects the blur caused by Multi-directional camera movements during flight. One of AMC’s main advantages is its software solution. There are no additional mechanical parts in the camera body that could degrade or cause it to malfunction. AMC technology was developed by Vexcel Imaging in 2020 for 4th generation UltraCam sensors. AMC is available through the latest UltraMap software.

AMC is implemented in UltraMap post-processing software and corrects for multidirectional and multiscale blurring during post-processing. It is available for all 4e Generation UltraCam cameras like Osprey 4.1 and Condor 4.1. As with the Osprey 4.1, each Condor 4.1 image taken by a camera cone is corrected based on GPS / INS system parameters such as speed and angular velocity as well as the camera design parameters.

The Condor M1 was based on the third generation UltraCam technology which, above all, was based on CCD technology with a corresponding pixel pitch of 4.6 um, a frame rate of 1.75 seconds and a footprint of 38,000 pixel image on the flight path. The system featured forward motion compensation (FMS) via timed integration (TDI). In contrast, the Condor 4.1 is CMOS-based with a corresponding pixel pitch of 3.2 Âµm, a frame rate of 0.7 seconds and an image footprint of 48,462 pixels on the flight path. It’s home to all new electronics, a lens custom developed for Vexcel, and Adaptive Motion Compensation that addresses motion blur in all directions (as opposed to the forward direction), which collectively dramatically improves picture quality. beyond the already impressive images generated by the Condor M1.