Smartphone manufacturers have used camera features to distinguish their devices for years. Some phones take stellar photos from one or two cameras. Others have a bunch of cameras to cover everything from wide angle to telephoto.

It now appears that Chinese phone maker Vivo is considering something different. Very different. The company has filed for a patent on a smartphone that uses a flying drone as a camera system.

People at Let’s Go Digital spotted a recent ad for the patent application to the World Intellectual Property Office. Vivo filed the documents in December 2020, but they were released on July 1, 2021.

Keep in mind that companies are filing patents on designs that never see the light of day all the time. There is no guarantee that Vivo will ever produce such a phone / drone hybrid, and it honestly seems rather unlikely.

But it’s not like it’s impossible. The technology of flying cameras already exists. All Vivo would have to do is pack it into a design that is compact enough to fit in a phone when you’re not actively using it.

Anyway, here’s the idea – the concept phone shown in the drawings looks like a standard phone. But when you want to use the flying camera drone, it slides out from inside the phone, revealing a battery-powered device with four propellers to keep it in the air, at least two cameras (one on top, one on the side ) and three infrared sensors.

The system would hypothetically allow you to capture images or videos that would be impossible to record using a normal smartphone camera held in your hand. For example, you could get above the action for aerial shots. Or you can point the camera at hard-to-reach or remote places before it returns to your location to reconnect with the phone. 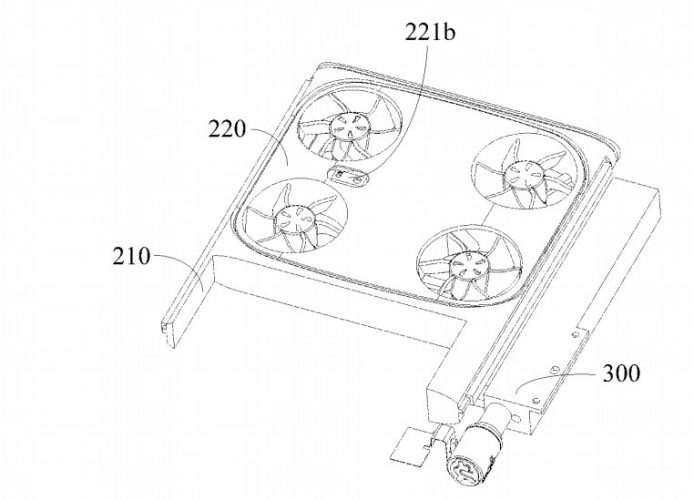 You would probably use your phone to remotely control the camera drone, but its built-in infrared sensors could help prevent it from crashing into objects.

Since this is only a concept at this point, there is no word on what kind of battery life you would expect, how far the drone could fly without losing signal. , whether it can stream images to your phone in real time, or whether it was recording data when it was docked, or one of the other million questions that come to mind.

The set reminds me of the Nixie flying drone that generated a buzz in 2014 when it won an Intel Wearable Design Award, but which was never marketed as an actual product. But drone technology has come a long way since then. Even Amazon is jumping into the action – last year the company introduced a Ring Always Home Cam flying camera designed to work as part of a Ring home security system. It is expected to sell for $ 249 when it goes on sale this year.

I somehow doubt that flying cameras are the future of smartphone photography. But given the arms race for smartphone cameras, I wouldn’t be completely shocked if Vivo or another company at least gave it a try.

Vivo is no stranger to trying unusual things after all – last year the company introduced the first smartphone with a gimbal-like image stabilization system. Vivo was also one of the first companies to embrace pop-up selfie cameras (a trend that has largely disappeared) and built-in fingerprint sensors (which are still relevant today, for better or for worse).

The main sources of income for Liliputing are advertising and affiliate links (if you click on the “Shop“at the top of the page and buy something from Amazon, for example, we’ll get a small commission).

But there are a number of ways to support the site directly, even if you use an ad blocker * and hate shopping online.

Contribute to our Patreon campaign

* If you are using an ad blocker like uBlock Origin and seeing a pop-up message at the bottom of the screen, we have a guide that can help you turn it off.

Vivo would work on a new "Smartphone with drone camera system"